This is how it starts…

‘Scummo curled up tighter under his dirty blankets. His hair itched and the sour smell of stale damp bedding made his nostrils widen. It was barely light but already the dog warden was doing its rounds. He heard the rattle of the creature’s nails on the gritty concrete outside as it sniffed at his door. He threw a shoe at the door, recklessly. There was a loud growling from the other side and then a frantic scrabbling as the animal tried to get in. Scummo had nailed a piece of tin over the lower part of the door. The dog retreated, and he could hear its paws padding away down the landing.

A child screamed loudly. Minna’s daughter, Kelpin, Scummo guessed. Well, she shouldn’t be out on the landing at this hour. He heard more barking and the sound of doors slamming; then it was quiet again. Scummo reluctantly pushed the blanket to one side and sat up, swinging his pale legs over the end of the mattress, and scratched his dry wiry hair. The apartment was cold… ‘

So begins the story of THE MARSH PEOPLE.

This young man, Scummo, responds to the distress of a terrified child he hears in the next apartment. Normally he would have ignored the scream, would have shut himself off from the horrific things going on around him, and got on with the mechanical, joyless business of surviving in the City. But this little girl’s distress triggers a response he doesn’t know he’s capable of.

He stops accepting the situation and begins to evaluate the risks of freedom and free will. The adage ‘Man cannot live by bread alone’ has never been more true.

When I started writing this book, I thought it was about ‘learned helplessness – see Seligman’s theory – but I think now it’s also about the primitive response systems we have to the distress of others. In some of us that empathic response is missing, or has been blunted by events that have left us emotionally numb. New parents are sometimes overwhelmed by the power of the newborn infant to trigger intense feelings of super-protectiveness, a need to nurture, hyper-vigilance and responsibility, and these feelings can extend to other peoples’ children too. A new-born baby’s cry is very hard to ignore. A mother weeping for her lost child, a father numbed by his failure to protect, a five year old with no protective adult reliably there – these
should move us all.

In a parallel world, of course, there are very young children who, as I write, are being held in detention centers in the U.S., without their parents. We should all be listening. The President’s wife is moved. Why not the President? 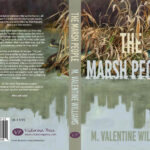