The King of Neverwas
was very good at subterfuge
and prestidigitation.
He plucked out Hope and flourished it
and showed it to the nation,
and then he flew it like a kite
as his very own invention.

‘Ooh’ and ‘Ah!’ the people cried
as Hope began to fly.
‘Now you see it, now you don’t.’
said the King, as he passed by.
But Hope the kite grew pale and thin
and dropped down from the sky.

For his next trick he captured Truth.
He grappled it and it fought back.
He got it cornered in a box,
so it could not attack.
He locked and barred and bolted it.
‘Let’s see you get out of that!’

‘That’s not right!’ shouted the crowd,
‘Truth cannot be confined!’
So he tamed the Truth with soft-boiled eggs
and butter on the side.
Truth became unrecognisable,
and everyone wanted a ride.

But it became too fat to walk,
though he took it out to the Park
on Sundays, on a silver chain;
people paid to hear it bark.
But they couldn’t tell if it was Truth
or the chatter of lies in the dark.

The Hocus Pocus didn’t work.
The people all turned away
and the King of Neverwas went off
to find a new game to play
and truth and hope have lost their place
and oh! we rue the day. 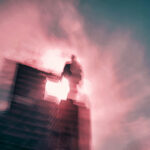